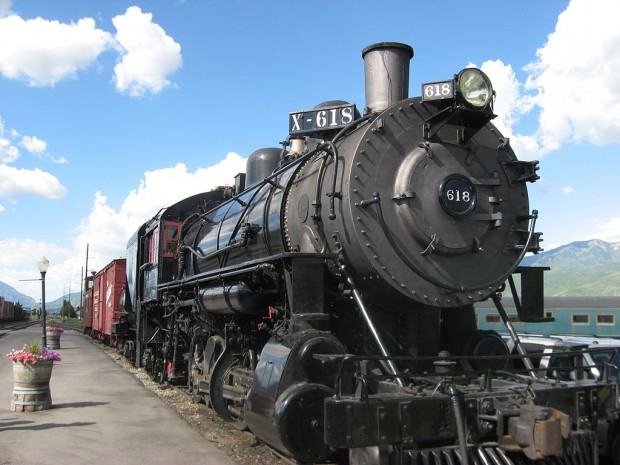 A great way to experience the Utah landscape, the Heber Valley Historic Railroad is a popular year-round destination for families and train aficionados. The 16-mile track snakes through a diverse range of terrain, and the slow-moving trains are perfect for both seeing the sights and enjoying a piece of local history.

Originally the line, which runs between Heber City and Vivian Park, was a branch of the Denver and Rio Grande Western Railroad, carrying freight and passengers from the turn of the century until 1967. The branch closed (and a couple decades later, so did the entire railroad), but nobody likes to see a historic train track go to waste. Within three years it reopened for tourists, and has been operating as such almost continually ever since.

Three vintage diesel electric locomotives and two 1907 steam engines (with a third currently under repairs) regularly travel the rails, taking passengers on round-trip tours of the beautiful Heber Valley. And there’s a lot to be seen—Mt. Timpanogos and the Wasatch Mountains loom in the distance while the tracks run right along the shore of Deer Creek Reservoir and the banks of the Provo River. Both the Soldier Hollow and Sundance ski resorts are visible from the train, as is the historic Tate Barn, a century-old structure rebuilt for the 2002 Winter Olympics. The wildlife in the area is abundant, and there’s a good chance you’ll see bald eagles, elk, or foxes out the window—even moose and cougars have been sighted along the tracks.

Even if it’s your first time riding the Heber, it’s quite possible that the trains will look familiar—you’ve probably seen them before on the silver screen. The currently-undergoing-restoration No. 618 appeared in a handful of independent films and TV episodes, and steam locomotive No. 75 has made an appearance in over three dozen films, from A River Runs Through It to Geronimo—dubbed “the movie train,” it features a number of interchangeable smokestacks and cowcatchers, allowing it to fit into any period between the 1880s and the 1960s.

Check the Heber Valley Historic Railroad’s calendar for itineraries before dropping by the depot for a ride. The trains run between four and six days a week, depending on the month, with a mix of regular trips and themed tours. Many of the regularly-scheduled runs, such as the year-round Deer Creek Express, involve a staged train robbery by the notorious bandit Black Jack Raven and his Soldier Hollow Gang, adding excitement for younger passengers. During the Christmas season Santa and his elves ride the train, and performances put on by everyone from fiddlers to magicians liven up the journey year round. The train has plenty to offer the adult vacationer as well, with chocolate and cheese-tasting tours (served with sparkling cider, not wine, here—this is Mormon country), and romantic train rides for Valentine’s Day. A number of other themed trips keep the railroad exciting year-round, making it a great place to return to again and again.