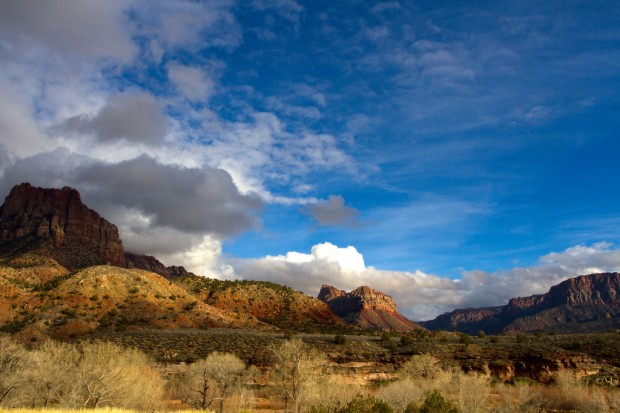 Though only the third-largest park in Utah, Zion National Park is by far the most visited, with over 2 million hikers, campers, and sightseers passing through each year. Don’t think it’s crowded, though—with 229 square miles, there’s plenty of room for everyone. And there’s a reason the park is one of Utah’s most popular vacationing and tourist destinations. Within its huge expanse can be found remarkably diverse terrain, stunning vistas and plenty to do.

To understand the park’s history (and the history of Utah as a whole), pay attention to the names of things. Before the national park there was Mukuntuweap National Monument, a much smaller area created to protect Zion Canyon by President Taft. A native Pauite name chosen by explorers meaning “straight canyon,” the change upset local Mormons, who had called it Zion—a holy place of refuge—when they settled the area almost 50 years earlier. When the monument was expanded into a National Park in 1918 the name was changed again, not only to appease the locals but also to jumpstart tourism—in the early days of the National Park System, many native and Spanish place-names were changed, based on the hypothesis that people wouldn’t want to visit a park whose name they couldn’t pronounce. The dual native and Mormon heritage of the area persists in the names of the various features within the park. The north end of Zion Canyon is known as the Temple of Sinawava, after the Pauite coyote god, while the three cliffs known as the Court of the Patriarchs are named for the biblical Abraham, Isaac and Jacob. The hazardous Parunuweap’s name is Pauite for “roaring water canyon,” while the Kolob Canyons are named for the planet Mormons believe is closest to God’s throne (which rotates so slowly that a single day is literally equivalent to a thousand years on earth).

But there’s so much to see and so much to do, in fact, that it’s really more than a single article can cover. So we’ll break it down:

The park can be found at Zion National Park, Springdale, UT 84767.