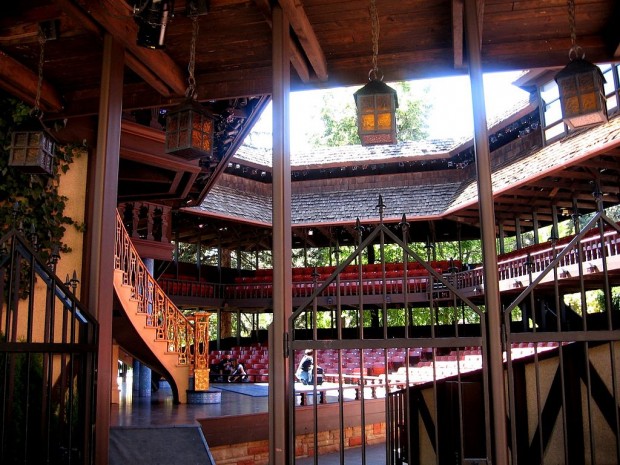 It’s today in the western United States, but you’d almost think you were back in Shakespeare’s London. The spitting image of the original Globe Theatre—open-air stage, wood-framed balconies and all—is the location of the evening, and there are people in 16th-century garb walking the green outside, selling snacks and programs and cracking ribald jests. It’s the Utah Shakespeare Festival, and it’s time for a show.

The festival started in 1961 as a three-show production on the campus of what is now the Southern Utah University, featuring a cast and crew made up of students and locals. The enthusiastic response kept it coming back year after year, and now it’s a eight-show, three-stage event that lasts four months and attracts 150,000 audience members.

Three of the shows—written by ol’ William himself—take place each year in the Adams Shakespearean Theatre, one of the world’s most accurate replicas of the 1599 theater owned by Shakespeare’s company which premiered many of his plays. The Adams is so close to the real deal, in fact, that the BBC used it as the setting for several of the plays in their filmed Shakespeare series. The other five shows are staged indoors at the Randall L. Jones Theatre. These usually include one play by Shakespeare or another Elizabethan playwright, and four modern classics, one of which is almost always a musical. Shakespeare matinees and staged readings of new shows, put on as part of The New American Playwrights Project, are staged indoors at the smaller Auditorium Theatre. Preview performances begin at the end of June, while six of the shows run July and August and the remaining two during September and October, plus one summer show continuing into the fall.

Currently the festival is undertaking a massive multi-year “Complete the Canon” project, performing all 37 canonical Shakespeare plays between 2013 and 2023. Included in this is the chronological performance of Shakespeare’s 10 history plays, beginning in 2013 with King John and Richard II and continuing in 2014 with Henry IV, Part I.

One of the most famous attractions at the Utah Shakespeare Festival is the Greenshow, a series of variety acts put on by members of the company outside the Adams. The show is free for the public and takes place before each performance, involving song, dance and farce. Backstage tours and a series of free seminars on subjects as diverse as acting, props, and the texts of the plays themselves take place regularly, allowing you to supplement your theatregoing experience with interactive education.

You can find the festival at the intersection of 300 West and University Boulevard, Cedar City, UT 84720.