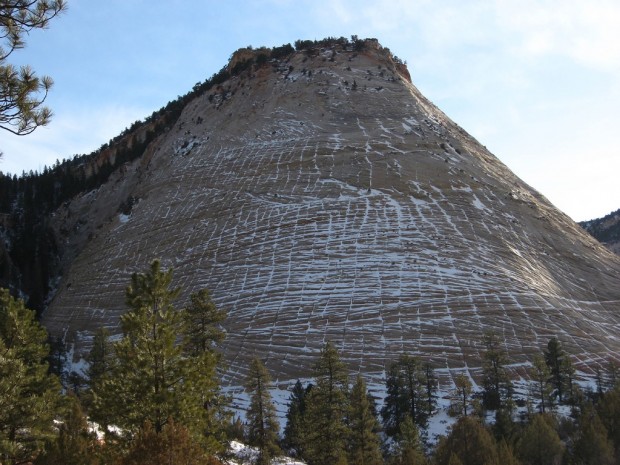 If you want a different look at Zion National Park, try the Zion-Mount Carmel Highway on the east side of the park. The most popular way to experience Zion is to travel up the main canyon from Springdale, but roadtripping in from the east provides a totally different perspective.

The road is a truly remarkable feat of engineering, called an “almost impossible project” by then-governor of Utah George H. Dern. With the advent of the National Park Service and the creation of Zion National Park, people needed a way to access the natural beauty it contained—but without good roads, that was more trouble than your average tourist wanted to go through. The result, unveiled in 1930, winds its way through some of Zion’s most difficult terrain, and at one point dips underground for over a mile.

To travel the Zion-Mount Carmel, enter the park from the east side on Highway 9. At the park entrance you’ll find the usual ranger station and public restrooms, but that’s as much civilization as you’ll see for the next 25 miles—there’s parking spots along the road, but other than that it’s pretty much just you and the wilderness. And that’s the draw of this part of the park: the inhospitable natural beauty. Just a little ways up the road you’ll encounter Checkerboard Mesa, one of Zion’s most impressive sights. The conical sandstone hill is deeply scored with crisscrossing horizontal and vertical lines, giving it the distinctive appearance to which it owes its name.

Past the mesa the road goes crazy, winding back and forth, up and down as you make your way through the rugged terrain. After a few miles of amazing scenery you’ll pass through a tunnel—but this is just a taste of what’s to come. A little further on you’ll come to the main event. It’s the Zion-Mount Carmel Tunnel, winding 1.1 miles through the side of the mountain. The tunnel was constructed in an era when traffic was light and cars were tiny, so making the trek today is a real adventure. It’s a narrow tunnel, just barely two lanes wide, with very low clearance. If you’re driving an RV or other oversized vehicle, you’ll have to pay the $15 one-way-traffic control fee—the tunnel attendants will actually shut down traffic coming from the opposite direction so you can drive down the middle of the tunnel where the ceiling is higher. There’s no electric light inside the tunnel, but windows carved into the cliff face provide both natural illumination and a great view of the surrounding area as you drive.

Once on the far side of the tunnel, the adventure is far from over. The road drops 1,100 feet from tunnel mouth to conclusion, over the course of less than a dozen miles. The hoodoos and slickrock slopes on the east side of the tunnel are here replaced by sheer cliffs, preparing you for the canyon up ahead. The road doubles on itself in a series of six switchbacks, zigzagging its way sharply downward. From here you can see the Great Arch, one of Zion’s often-overlooked marvels—a sandstone formation in the shape of a “blind” arch, as opposed to freestanding structures like Kolob Arch.

And then, just a few miles further down the road, you’ll descend into Zion Canyon.